CCI Primers are continuously tested and improved. As a result, today’s CCI primers are more sensitive, easier to seat, and more compatible with progressive and automated loading equipment than ever before. They utilize modern non-corrosive and non-mercuric initiator mixes for the cleanest burn possible.

The CCI Mil-Spec No. 35/50 Cal BMG primer provides the most reliable, consistent ignition. It’s built to military specifications and specifically designed for use in 50 BMG. CCI Primers are continuously tested and improved. As a result, today’s CCI primers are more sensitive, easier to seat, and more compatible with progressive and automated loading equipment than ever before. They utilize modern non-corrosive and non-mercuric initiator mixes for the cleanest burn possible.

Military-style semi-auto rifles seldom have firing pin retraction springs. If care is not used in assembling ammunition, a “slam-fire” can occur before the bolt locks. The military arsenals accomplish this using different techniques and components. Including different primer sensitivity specifications. From their commercial counterparts. CCI makes rifle primers for commercial sale that matches military sensitivity specs that reduce the chance of a slam-fire when other factors go out of control. If you’re reloading for a military semi-auto, look to CCI Military primers.

Primers come in different strengths, technically known as “brisance,” a word defined as “the shattering effect of a high explosive.”
Primer brisance mostly depends on the length of the flame that leaps out of the flash-hole after the firing pin whacks the primer cup.

Huge rifle cases such as the biggest Weatherbys, Remington Ultra Mags, and older British African cartridges require a lot of very slow-burning powder to operate at all.  Slower-burning powders are normally more difficult to ignite, and a bigger flame of longer duration helps, especially in cooler weather.  The first “magnum” primer, the Federal 215 was designed for this very purpose.  Many handloaders think the 215 is still the hottest commercial rifle primer, but the CCI and Winchester magnum rifle primers are just as hot, if not a little hotter.

How fast a powder burn depends not only on granule size (bigger granules have more relative surface area) but on exterior coatings.  Extruded powders, such as relatively small-grained 4895 or large-grained H-4831 depend mostly on granule size to control burning rate.  Ball powders don’t vary much in granule size, so depend mostly on relatively flame-resistant exterior coatings to control the burning rate.  By definition, these coatings make ball powders harder to ignite.

There are no reviews yet. 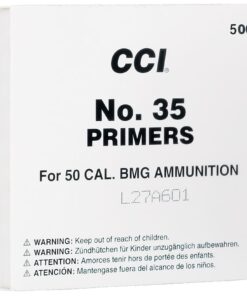